What Grenville Snowdon does not know about the fresh produce business is not worth knowing. Born into the business he was working in his father’s fruit and vegetable wholesalers, in the old Covent Garden, in his teens, before branching out on his own at 20, with a catering supplies business based just outside of New Covent Garden.

In 1981 he created Chefs Supplies, selling fresh produce to London’s top hotels and restaurants before, sensing the coming revolution in British food, he founded The French Garden in 1987.

Sourcing products in Rungis Market, Paris, Grenville rapidly built long standing relationships with some of the best growers and producers in France and throughout Europe, and the company quickly flourished, enabling him to sell his other business and concentrate all his attention on The French Garden.

More than a quarter of a century on the company has continued to grow and prosper under his watchful eye but he still credits those early days, spending time himself as French Garden’s buyer in Rungis, getting acquainted with the produce and gaining a crucial understanding of how the market operates, for his overwhelming success.

Iain is the man with his hand firmly on the French Garden tiller, overseeing all components of the company to ensure it functions seamlessly as a whole.

He started in the produce business in 1982 when he joined fruit giant Fyffes, spending seven years there, before joining Peter Blacks in 1989.

In 1991 he moved to Goldsmiths, staying a couple of years, before holding down two short jobs with Robert Charles and Walter Braun and finally joining The French Garden in 1993.

He has played a major role in making The French Garden what it is today and his career path here, rising through the ranks to MD, is testament to both his hard work and the career opportunities the French Garden present. 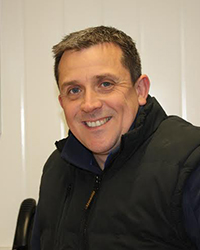 Chris Dart started in the market business as a 16-year-old dissection clerk analysing salesmen’s tickets with wholesalers AFI. Progress was never going to be a problem for Chris.

Instead of heading down the pub at the end of the day, he stayed behind teaching himself to use one of the first computerised accounts systems in the country - a move that put him way ahead of his contemporaries - and within a few years he was running Agrexco’s UK wholesale operation, a business worth £18m per year.

Chris joined French Garden in 1999 and today as a French Garden Director he runs the marketing side of the business dealing with growers throughout Europe and customers across the UK.

There is almost no job that Nathan hasn’t done during his time at French Garden, across all areas of the business.

He joined in March 1994 as an HGV driver on the Scottish run and after eight years transferred to the warehouse, rising rapidly through the ranks to salesman and now director.

Nathan’s remarkable organizational skills and day to day hands on approach drive a process of continued improvement right across the company.

Working closely with Chris he looks after customers throughout the UK and liaises with our European growers, often spending time in the trading halls of Rungis, seeking out new products and fostering relationships with wholesalers.

Rita was working as a waitress, not in a cocktail bar but, in one of the restaurants that Grenville Snowdon delivered to when he first offered her a job and she has worked alongside him on and off ever since.

Aged just 16 she started to learn accounting and book keeping and remained with the company, until 1981 when she left to work at Grenville’s catering supplier, Chef Supplies, in New Covent Garden. Working just two hours a day at the outset, business boomed and eventually it was so successful that Rita was taking work home with her most evenings.

She had her first baby in 1985 and remained at home for five years to raise three children, during which time Grenville had sold the company and set up The French Garden. Once again Rita returned to work with him and, as her family grew up, gradually increased her hours to eventually become full-time, finally being made a director in 2006.

After a couple of years working in the post office Steve joined his brother who was working at the New Covent Garden business, Poupart , and remained there for the next 23 years.

His speciality became soft fruits and when Poupart closed their Covent Garden outlet, Steve, together with his two brothers who worked alongside him, brought his expertise over to The French Garden in May 2001.

Things changed again when both of his brothers retired in 2013 but with his son, Joe now working alongside him, family remains key and Steve is a firm fixture at French Garden.

Joe has been coming into New Covent Garden Market for more than twenty years, doing odd jobs for his dad and uncles as a young boy for a little holiday pocket money. These days his job is a lot more prominent working in sales for French Garden’s speciality soft fruit section. Joe joined the New Covent Garden Flower Market in his late teens before a year long stint running his own flower, fruit and vegetable stall. It was hard work and he was out in all weathers so when the opportunity arose to join his father, Steve at The French Garden in 2012 he snapped it up.

Like most of the French Garden family Joe is passionate about his work, and despite the early and sometimes unsociable hours he says he ‘loves’ the job and the camaraderie both within the company and the market as a whole.

To Indian born Aneesh The French Garden team and family aren’t just morale-boosting terms bandied about to support a good work ethic. The company really is like family to him.

Joining the business in 2011 after graduating university, he worked his way up from a packing role in the workhouse - when fluent English was still a challenge - to his current role as a much-liked salesman, with a solid understanding of day-to-day workings of the market. He admits the working hours can be tough but the people more than make up for it; despite the sometimes stressful demands, fulfilling customer orders, he loves the fun environment in the workplace.

Aneesh’s colleagues mean so much to him he’s even happily spent Christmases with some of them – a welcome invitation when his own family are still thousands of miles away in Southern India.

Aside from a couple of years in double glazing during his late teens Garry has spent his entire life in transport and haulage and knows the business inside out. He has come a long way since passing his HGV licence aged 21 and is now in charge of the entire French Garden fleet.

Garry joined the company in April 1998 as a driver but his job today involves organising all our transport both from our new depot in Rungis and from the London warehouse to all our customers across the UK.

In January 2014 Garry was awarded a Certificate of Professional Competence in Road Haulage, enabling French Garden to transport goods for other people for the first time.